March 15, 2013, Aurora, Oregon. The new TDR-CableScout is a unique new pulse generator for testing transmission lines from 50-600 ohms used by ham radio operators. Unlike expensive commercial TDR systems which include a dedicated display, the TDR-CableScout is an entirely new product. It is an accessory for your oscilloscope. It is a smart, very high speed pulse generator, with selectable TDR DUT impedances and integrated high speed samplers.

Since the TDR-CableScout has built-in samplers, no clumsy “T” connectors are required. This allows you to use your scope’s vertical amplifier in the fast 50 ohm input mode. If your scope does not have a 50 ohm vertical input, we can provide you with 50 ohm pass-through terminators for the highest resolution and speed. Just connect it to your scope with conventional 50 ohm cables and your transmission line or cable to the DUT port, and the TDR-CableScout interrogates your cable with either a Step TDR or Pulse TDR signal and provides vital information of transmissions line used by ham radio operators. No manual calculations are needed as the TDR-CableScout TDR computer provides measurement results right on it’s high contrast back-lit LCD.

The TDR-CableScout comes in two models, the standard version and the pro version.

Price and availability to be announced separately

Application note entitled “Measuring Return Loss with an oscilloscope and a Return Loss Bridge (RLB)” has been completely re-written. We expanded and made corrections to this application note. There existed some confusion as to the definition of “return loss” particularly whether it is a positive or negative quantity. Also improved is the step-by-step procedure on how to measure return loss in every day ham radio applications.

We thank our customers who gave us their valuable time in providing us feedback. Without their help the improvements would have been more difficult. We encourage all our customers to contact me here at PreciseRF with their recommendations and any feedback which will improve our products. We advertise and support eHam and QRZ.  Reviews on either site will  help other hams select products for their ham radio activities. 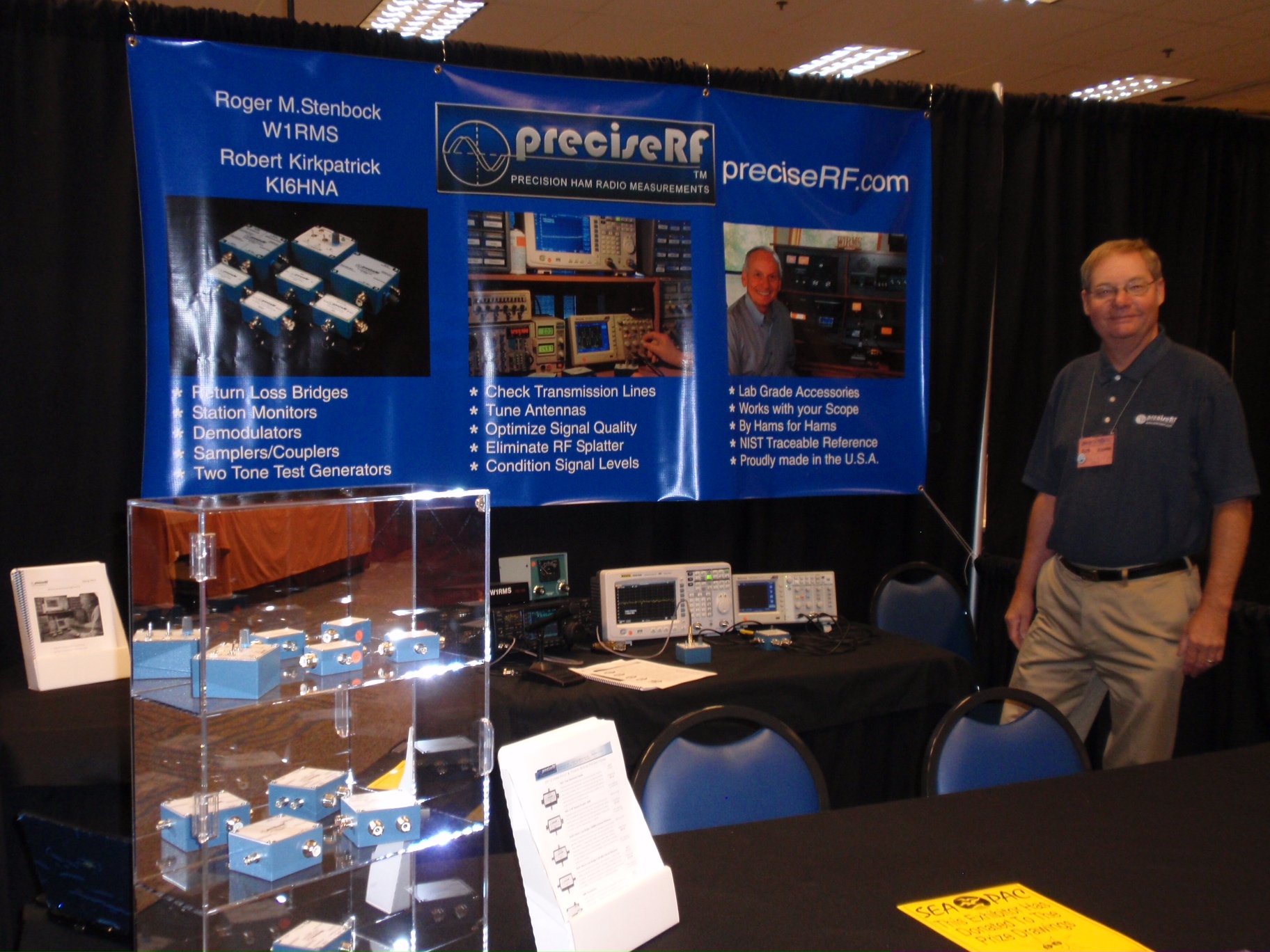 PreciseRF engineer, Robert Kirkpatrick of KI6HNA, stands ready for another demo of PreciseRF products at the Sea-PAC convention in Seaside, Oregon. Audrie Crane, in charge of sales at the convention, is pleased to report that interest in our products continues to grow with brisk sales to Ham Radio operators. PreciseRF will exhibit its new product at the SEA-PAC convention in Seaside Oregon, June 1, 2, 3. Our team is looking forward to meeting all Ham Radio enthusiasts at the show. See all of new new products which are ideally suited to maximize your signal quality and RF output. To kick off our business, we have some really attractive deals for you. The PresiseRF team is proud to announce opening the doors to our new business. Said Roger Stenbock “After a nearly a year of intense product development, production of inventory, (all in-house made in the USA), we are pleased that all the pieces, from product development, production of inventory, organizing and launching the eCommerce store, all came together.”

Immediately after opening our store, our first customer purchased the popular SMT-Pro Station Monitor. His order was placed on line. Success in starting a new business in the Ham Radio niche market is not guaranteed, and one always wonders what details might be overlooked. Fortunately, thanks to our dedicated team, the notification to sales, invoicing, and shipping occurred without a hitch.

A special thanks to Travis Cannon for his contribution. While not a ham (not yet),  Travis is an experienced computer scientist with the added benefit of his business expertise as an MBA.  He created the eCommerce store and provided us with marketing and business guidance so often overlooked by engineer types. Upon hearing of our fist sale Travis commented “Way to go team”

Also, we’d like to thank Rob Kirkpatrick KI6HNA, for his expertise in industrial design and ECB layout.  He is comfortable and very experienced with CAD tools. As a result, Rob was invaluable in creating and running the files on our CNC machine for our prototype boards. He reviewed the electrical design and asked the “what if” questions, keeping the design engineers honest. Rob’s philosophy is that quality must be designed into a product, and is much more difficult to achieve by testing alone. One of Rob’s favorite refrain “calculate twice, then check twice, then commit to the final design”  Good advice as virtually all our ECB boards passed muster on the first pass. Production and sales manager Audrie Crane commented, “After spending months building inventory, this sale was really exciting and I look forward to working with Ham Radio customers to provide the best possible products and service”.