The PreciseLOOP EXPRESS Magnetic Loop Antenna (MLA) is a lower cost model that includes just the basics but with the same high quality and performance. The Express Magnetic Loop Antenna (MLA) is a convenient, lightweight antenna, which can be deployed quickly and is ideal for use in places where HOA restrictions make full size wire antennas impossible, or where there just is not enough room to erect a conventional antenna. Many operators favor the MLA for field day and SOTA operations. When designed and constructed properly, a MLA can perform as well or even better than a dipole antenna. A MLA is a very simple antenna. It is just an inductor formed by a wire loop and capacitor tuned to resonance. How well this antenna works depends on several factors: The PreciseLOOP EXPRESS is optimized for portable operations featuring greater power handling capability (45W PEP), a precision 6:1 reduction dial with calibrated dial marking, a high surface area 38″  LMR400 radiation loop and copper tube induction loop. Included in the package are the LMR400 radiator loop, copper coupling loop, HG-1 tuner,  three section PVC mast and basic bag. (not included are the tripod and adaptor, cables, and premium embroidered padded carrying bag).

Check this video from Greg VA7BC Low Loss Tuner
The tuner is the heart of any MLA. The capacitor must be very low loss with high Q. It must have sufficient high voltage rating to handle the designed power. The PreciseLOOP HG-1 features a custom dual stator high Q air variable capacitor driven by a 6:1 reduction dial along with calibrated dial markings. High Quality Components
The components are mounted on a high quality PCB. This insures ideal impedance match, low losses, and repeatability. Included is an accessory port on the bottom of the PreciseLOOP HG-1 case. Each component is HIPOT tested to ensure you get constant and reliable performance.

Speciﬁcations based actual measurements and/or computer models. All products are calibrated and tested to meet or exceed published speciﬁcations. PreciseRF warrants its products to be free from defects in material and workmanship for one (1) year from the date of purchase. If you need support or service for your PreciseRF product, whether the product is under warranty or otherwise, please contact PreciseRF and arrange for a return or repair authorization. Manufacture’s Suggested Retail Price (MSRP). Prices and speciﬁcations subject to change without notice. (c) 2018 all rights reserved preciseRF 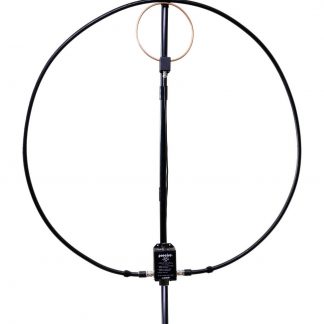 You're viewing: EXPRESS PreciseLOOP Magnetic Loop Antenna $299.50
Rated 5.00 out of 5
Add to cart